Being Asked to Give an Unexperienced Student an Overview of a Test Strategy, What Would You Do?

This is exactly the situation I encountered lately: my boss asked me to help a young student to get a feel for what is needed in a test strategy. I got three hours to do so and 15 minutes preparation time.

On top, the student was not yet informed about what he needs to learn. Apart from supporting some unit tests, the student had no idea about testing. We also did not know if he will be encountering V-Model or agile in his project to come.

So we had to be open to everything!

First Hour: The Concept of the V-Model

I used a more or less generic V-model as an illustration of the close relation between requirements and tests. I won’t be explaining here the V-Model, but list those concepts, I was able to explain using the V-Model, that I think need to be considered in a test strategy

Obviously, the link between V-Model and the agile world is the idea, that in a sprint there are somehow many little V-s. And there is more. As I did not have much time I picked the first presentation I found with Google, by Lisa Crispin from 2009. I have the feeling, that also agile moved on quite a bit, but she has in there a good basic explanation of the four testing quadrants. And this is what I used for “my test strategy” (apart from all those organizational und communicative differences an agile approach brings) 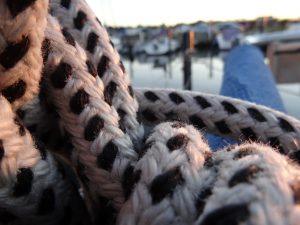 Not knowing how large the project to be will be, I then decided to explain some aspects about the roles and responsibilities in testing. Luckily one person can take several roles, and will, depending on the different project organization available. For this topic I used an existing test concept from a former project of mine. That had more than 100 pages, so I tried to concentrate on the following points:

Do you need a document for all of that? Well that depends…

What did I miss out?

Right afterwards, I was worried about all those things I did not talk about. I guess the first issue that came to my mind was that there are so many test types out there, out of which the most relevant ones to be picked. And probably so much more. I added a little reading list to my “class” to cover some of the remaining stuff, but I wonder if I got the REALLY IMPORTANT STUFF.

What do you think: what would you have done? What did I miss?